Applying the ‘KISS principle’ to Outdoor Teaching and Learning

Many schools we visit and work with are very serious about taking their teaching and learning outside of the classroom and we see some fantastic practice and highly creative methods. Often, however there is a misconception that we require specialist and costly resources, facilities and apparatus in order to be effective. During our staff training we bring along a range of simple, low cost resources that can be easily acquired by schools to make this a reality. We offer an idea below that help provide a huge range of learning activities. 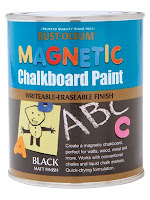 Yes, chalk! Big, chunky outdoor playground chalk in different colours. All that’s then needed is a hard surface such as playgrounds, paths, car parks (without cars in obviously), the walls of buildings. Obviously you can also place blackboards on walls and fences or simply apply a couple of coats of blackboard paint to an existing surface. This opens up a world of opportunities for simple resources that lead to powerful learning. 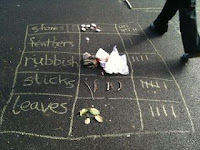 Collecting, counting and more complex data analysis of items collected from the outdoor environment. The simple drawing of tables and boxes for categorising. Charts and graphs for more complex data recording and analysis can also be very easily created. The range of options can event extend to models, symbols and graphic representation of the solar system, the human circulatory system. We have also seen schools using chalk representations of the periodic table for students to fill in over a period of time and creative teachers posting maths problems in chalk for students to take on during breaks and lunch periods. 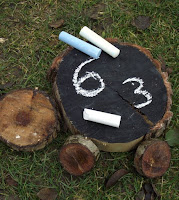 So although thermoplastic playground markings and elegant blackboards are a nice to have in our outdoor areas they are not always necessary when so much powerful teaching and learning can take place with much simpler approach.
Do remember, take photos, write up your approach and share great ideas and methodology with colleagues.


Applying the ‘KISS principle’ to Outdoor Teaching and Learning
We follow on from our previous theme about keeping it simple in our approaches to teaching and learning in the outdoors. Many schools we visit and work with are very serious about taking their teaching and learning outside of the classroom and we see some fantastic practice and highly creative methods. Often, however there is a misconception that we require specialist and costly resources, facilities and apparatus in order to be effective. During our staff training we bring along a range of simple, low cost resources that can be easily acquired by schools to make this a reality. We offer an idea below that help provide a huge range of learning activities.
Tarpaulin Teaching
We strongly advocate the use of the humble tarpaulin. They can be bought in all different sizes for just a few pounds from DIY or hardware stores (and even cheaper on-line). All that is then needed is a permanent marker pen and some long straight edges with which to create a grid or x and y graph axis. Then, finally, some metal pegs to hold them down and you have a hugely versatile resource for outdoor, large scale, collaborative teaching and learning. 6 x 6, 8 x 8, 10 x 10 patterns (and more) are all useful according to the activity and age group you are working with.
Just a few of the activities that can then be undertaken are as follows: 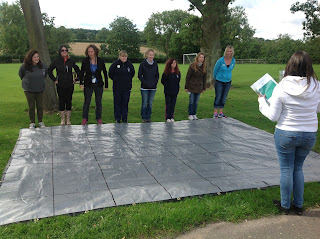 I’m sure you can think of many more. Do remember, take photos, write up your approach and share great ideas and methodology with us and your colleagues.

Posted by School Outdoor Learning - SOuL at 05:07 No comments:

As we approach the last term of the academic year and your top year students ready themselves to leave the school to move on to the next exciting ‘instalment’ of their school careers. Try this exercise to help them creatively collect and capture their memories, thoughts emotions about their time at the school and the transition they about to embark on. 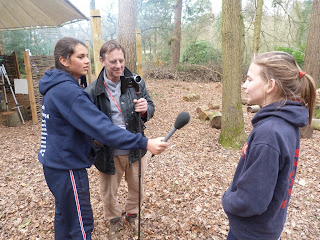 Overview of the Activity
For each pupil to produce a short film about their time at the school, their favourite memories and their feelings about leaving and the new school they are moving to.

Main Activity
The purpose of this activity is for all of your top year pupils to spend time producing a short ‘legacy film’ before leaving. First get students to spend time thinking about and writing down ideas about some or all of the following:
They should write down and capture these thoughts and ideas in the form a short story or script that they can then tell to camera. The film should be short; no more than 1 -2 minutes.
They can then go into the filming part of the activity. Working in pairs or threes (one to be filmed and the other(s) to do the filming). Encourage them to travel to different parts of the school where anecdotes will have most relevance/meaning. 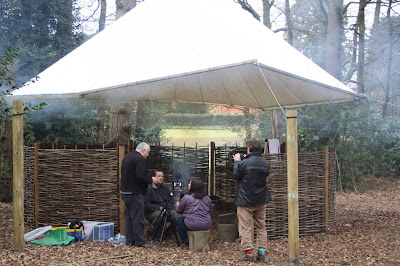 Once the footage has been shot they can then spend time editing the film and cutting out the extraneous elements. With simple software they can also add music, credits, additional photos, etc.
Finally prepare for playback to their peers and others.
There are a variety of simple software devices and Apps that allow for video capture, editing and playback together with really creative means of being able to add features such as opening and closing credits, music, special effects etc. Examples are outlined above. Discourage overuse as it should be more about them and the story.
Equipment Required
Simple camera equipment (smart phones and tablets can be best). Film making and editing software such as imovie, Filmic Pro and Voddio. Access to tablets, laptops or PCs for playback. The editing can be done directly from the tablet or hand held device. External, handheld microphones can be a useful addition to your equipment and will create much better sound quality when outside.

Set Up
This activity will need to be done over a series of lessons/sessions involving the creation of each student’s story, the production of the initial film footage followed by the editing and completion. Encourage a positive and celebratory tone to the films and the stories to be told.

Plenary
There can be many conversations and discussions about the technical/creative elements of the activity as well as the emotional/feelings aspects of the process. Both are worthy of investigation through careful questions. Be cautious about the emotional aspects of this process and how pupils might be feeling about the future changes they are about to experience and the impact that it might have on them. Focus on the celebratory elements of the stories and the task achievements wherever possible. 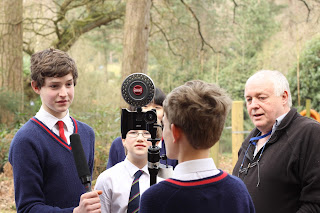 Extension Activities
Pupils could include a part of their film that requires them to interview other people (staff and/or other pupils) about them and what they have appreciated about their contribution to school life.
Once completed the pupils can sit for a grand viewing of each other’s films. Consider having a competition to select the best and upload some (or all) to the school website.
You could spend time producing a collective film of the whole year group with different shorter parts of their individual films to be put onto it along with other connecting parts.
All pupils should leave with a copy of the films on a CD or memory stick as a memory of their time at the school. The best films can also be posted on your school’s website which can be a great promotional tool.

These lesson plans and activities are taken from our LOC Handbook. Please see our web page for more details www.schooloutdoorlearning.com/loc-handbook

Posted by School Outdoor Learning - SOuL at 05:21 No comments: